A Home for Neurodegenerative Norns

[[WARNING: The post that follows will get quite detailed, and contain very few images]]

I've been keeping myself quite busy lately, helping out with the Dragon norns, created by Jack over at Addicted to CAOS. They're currently going through a lot of tweaks, which I've been helping test and observe, and I've also been recolouring the relevant Draconian and Gargoyle sprites to make them a little less mismatched (unfortunately, this has hit a bit of a snag).

The latest test involved a brain edit, attempting to improve their ability to plan long term, involving the combination lobe. This came shortly on the heels of some extensive testing of my own regarding the effects of chemical 130 (tryptamine) on the Dragon norns, who are based on the genome edits that include sensitivity to that chemical. Specifically, it is a hallucinogen, the effects of which become quite obvious if you combine the Creature Remote Control's mind-reading effects with those of the Health Bar. A number of conclusions were reached during this testing that had significant impact on the brain edit test, and a couple of important agent edits were made by myself as well, in the course of facilitating the testing. First, I edited Emmental's Medical Monitor (kudos go to Emmental, the medical monitor and norn statistics monitor have been invaluable to me) to also detect 130, and I edited Ghosthande's Dynamic Blooming Flowers to give 130 and alcohol in both the seeds and the plant itself (I also made a few other edits, but they're incidental to the testing).

The brain edit made by Jack was, unfortunately, a failure. Not only did it not improve their long-term planning, but it actually functioned as a neurodegenerative disorder. Babies with the tweak functioned fairly normally, though they were noticeably less scattered than your average norn. They tended to have much better focus, and they cycled through different thoughts at a slower rate. This left them much more inclined to see a single action through to its end, rather than wandering around and forgetting what they were doing. On the whole, it seemed largely... positive. I introduced some to 130 as well, and found that they suffered less ill effects from it. They experienced fewer hallucinations, and were better able to maintain their thought processes. The chemical still had its usual impact of making a norn more inclined to eat things, edible or not, but the effect was less scattered and dramatic, and more likely to include actual eating.

Unfortunately, behind this promising beginning lurked a hidden tragedy. The problems with this tweak took time to fully manifest, but as time went on, the tweaked dragons became increasingly unable to form new combinations or thoughts, and they slowly lost combinations they had already known. At first, Jack found the increasing limitations to manifest more benignly, but in my own world, 'eat bug' and 'eat food' were among the first things lost, leading to distressed norns starving themselves to death, literally incapable (as far as I can tell) of forming the thoughts required to feed themselves. They would become increasingly fixated on particular combinations, and intervention from the hand would become increasingly ineffective. Slaps could not deviate them from their fixed thought or action, and they would not (could not, I suspect) follow any action suggested by the hand that they had lost.

Desperate, I turned to the thought-scrambling properties of 130. I hypothesised that the hallucinogen could force them out of their rut, and allow them to think combinations that they had otherwise lost access to. Jack and I had already ascertained that norns do, in fact, learn from their hallucinations, so I thought that allowing them to experience favourable actions through hallucination might make them more likely to perform those actions, even when not on 130.

To a certain extent, I was right. Once I managed to get them to take in some of the hallucinogenic flowers I had created, their thought patterns regained a little of their old fluidity. They became more able to focus on other things, and also more responsive to suggestions by the hand. Even the usual effect of making a norn attempt to eat everything in sight, edible or not, became a boon, though that part hadn't occurred to me before the attempt. 'Eat' would not always be paired with something edible, but it did so often enough to vastly increase their survivability.

Unfortunately, though, this effect did not persist much at all once the 130 wore off. Occasionally there might be one or two new combinations back in the pool of what they were capable of thinking, but it never lasted. Additionally, 130 only showed signs of helping during the middle stage of their degeneration. Once things reached a certain point, even the effects of medicinal 130 could not budge their thought processes.

However, despite their overall lack of functionality, Jack came across a startling realisation. I had been testing the medicinal effects of 130 on single norns, for the most part, while he had left his largely unattended as he attempted to find a fix for the tweak. Only, his work was interrupted by a pregnancy notice. Then another. And another.

Somehow, despite their overall inability to care for themselves, they were breeding.

This prompted me to create a home for a colony of them, in order to reproduce (ha!) this situation, and see for myself where things might lead. As I was using my SERU/special needs world for them, this necessitated a new, unlinked metaroom that would be safe to thoroughly seed with hallucinogenic flowers. After all, while I wanted these norns to be able to access them for medicinal purposes, in normal norns, frequent or sustained use of 130 tends to create learning disabilities. Not something to inflict on norns already struggling!

To that end, I injected the Biodome. I don't often use it, as it is isolated from the rest of the ship, but that very quality made it perfect for this purpose. Additionally, it was nice and large, and well set up to give swimmers and fliers, as the dragons are, plenty of room to manoeuvre. I set up most of the lower layers as salt water and seeded them with life, mostly from Norngarden 4, which will happily seed into any body of water. I also made liberal use of bounty bug nests, as is my usual strategy when dealing with carnivorous breeds like the dragons, and spread around some crobsters. 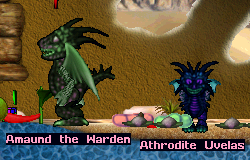 Once the room was sufficiently seeded, I placed in a portable egglayer and the two tweaked dragons that I already had alive. Athrodite, being a child still, was not yet noticeably disabled. Amaund, however, was heavily so, and greatly suffering from a lack of nutrition. Interestingly, as soon as I put them into the room, she noticed and immediately started eating the crobsters (she had not previously encountered critters, as the critters I have are largely aquatic, with terrestrial options mostly amounting to bugs). This implied some interesting things about the nature of the degeneration.

This particular project is unlikely to be much documented, but I thought it would be good to show everyone what I'd been working on, and to share some of the conclusions I had come to, which provide interesting insights into norn brains. However, if the issues with the recoloured sprites can be fixed, those will definitely get shared here!
Posted by Athena at May 15, 2017

Elsewhere in the Community