A Home for Neurodegenerative Norns

[[WARNING: The post that follows will get quite detailed, and contain very few images]]

I've been keeping myself quite busy lately, helping out with the Dragon norns, created by Jack over at Addicted to CAOS. They're currently going through a lot of tweaks, which I've been helping test and observe, and I've also been recolouring the relevant Draconian and Gargoyle sprites to make them a little less mismatched (unfortunately, this has hit a bit of a snag).

The latest test involved a brain edit, attempting to improve their ability to plan long term, involving the combination lobe. This came shortly on the heels of some extensive testing of my own regarding the effects of chemical 130 (tryptamine) on the Dragon norns, who are based on the genome edits that include sensitivity to that chemical. Specifically, it is a hallucinogen, the effects of which become quite obvious if you combine the Creature Remote Control's mind-reading effects with those of the Health Bar. A number of conclusions were reached during this testing that had significant impact on the brain edit test, and a couple of important agent edits were made by myself as well, in the course of facilitating the testing. First, I edited Emmental's Medical Monitor (kudos go to Emmental, the medical monitor and norn statistics monitor have been invaluable to me) to also detect 130, and I edited Ghosthande's Dynamic Blooming Flowers to give 130 and alcohol in both the seeds and the plant itself (I also made a few other edits, but they're incidental to the testing).

The Closing of Wolf IQ

Unfortunately, although carefully supervised breeding went a long way towards increasing sprite diversity and eliminating the strain of youth-stuck highlanders that had developed, it seems that I very shortly thereafter mutated an adult strain. As there is no way for me to feasibly weed out this strain and prevent it from breeding, I am officially calling a close to the Wolf IQ run.

There are still several exports available upon request, and anyone who has no particular problem with (or likes) highlander norns is also welcome to request norns from the current population. I did a good job diversifying sprites, and some of them are quite pretty!

This is not the only project I intend to do, so although it has sadly come to a close, keep an eye on this space for the next one! 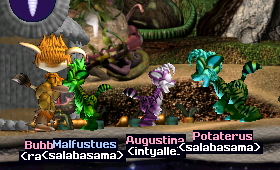 After about a week of waiting, it seemed I had all the entries I was going to get for the Wolf IQ run, and my setup had largely been tweaked to my satisfaction, despite occasional bugs. So, I got down to the business of setting up the world.

For the most part, this step went smoothly, although I'm still having a couple of issues with the Other Lone Shee's Ark since the last update, and will have to include it later. I gave several minutes for the world's ecology to settle, including seeding bramboo plants in a few other locations, and then it was time to open up the first egg.

Elsewhere in the Community